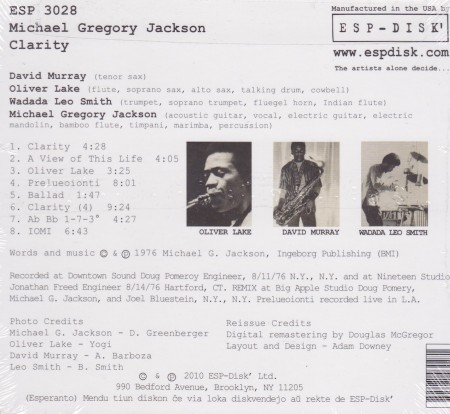 I recently had a chance to sit down and talk with Michael Gregory (who dropped the Jackson from his name in 1982) about Clarity (his 1976 debut album on the ESP label) and his career in general. After dropping off a few copies of the Clarity CD re-issue to sell on consignment at Mystery Train Records, Michael agreed to have a chat about his career and his debut album in particular.

Describing his early musical years, Michael said that he started playing guitar at the age of seven and was working on his own compositions at around 10 or 11 years old. He went on to describe the weekly trips to Cutler’s record shop in New Haven, CT that impacted him. He noted that when he went record shopping he was not concerned about genre but rather enjoyed and appreciated the visual aspect of vinyl with it’s stunning large format cover and sleeve art. Michael would pick up records that caught his attention – from Coltrane’s Ascension and Pharoah Sanders’ Tauhid, to records by Hendrix, Blue Cheer, and Cream, as well as Indian, Balinese, classical and avant garde 20th century composers.

It was also in New Haven that a teenage Michael Gregory met Wadada Leo Smith – and not only Wadada Leo Smith, but a whole scene of guys that would push and inspire him creatively – Anthony Davis, Wes Brown, Pheeroan akLaff (“who actually came in later years from the New York scene – it is complicated history” noted Michael), Dwight Andrews, Jay Hoggard, and Gerry Hemingway, just to name a few. Michael’s meeting and subsequent work with Wadada Leo Smith left a lasting impression though. He saw Wadada Leo Smith as a mentor, “He was an elder, he opened my mind further when it came to composed and improvised music, sound and different forms of notation.”

It was through playing with Wadada Leo Smith that he met Oliver Lake, who after a gig in Boston, MA contacted Michael to join him and play in NYC and tour in Europe. This led to a working relationship that lasted from the mid 70’s to around 1980 – in many musical forms – including the bassless trio that also included Pheeroan akLaff, which was caught on the Zaki LP recorded live at the 1979 Willisau Jazz Festival (Hat Hut Records). Michael had nothing but amazing things to say about the 70’s NYC scene. He talked with pride of the vast collaborations happening between different disciplines and the ability at the time to circumvent traditional performance venues with the loft scene blossoming (check out Michael’s live loft cuts on the Wildflowers series recorded at Sam Rivers’ legendary 70’s loft shows). He considered this time a true renaissance period for Afro-American creative music.

1976’s Clarity, featuring aforementioned avant garde figureheads Oliver Lake and Wadada Leo Smith, as well as David Murray, was Michael’s first release as a band leader and he wanted to focus on the use of interesting, unconventional instrumentation, which included instruments ranging from traditional jazz horns to Indian flutes, gongs, electric mandolin, and bamboo flute – in general a different sound conceptually for a jazz group. It is a striking record. Immediately the listener is struck by the lack of a driving percussive element, which forces the other instruments to the forefront. From quiet, gentle and at times challenging interplays between instruments, to compelling guitar textures and a beautiful vocal by Michael on the opening track, the album is uncluttered and stunning.

Michael explained, “I was playing my music, I do not choose to categorize or apply unnecessary limitations or boundaries to my compositions.” Michael also recalled that the recording felt and sounded natural. Not only did he write for that specific occasion and those players, but he had been playing in NYC and Europe with these guys since shortly after graduating high school in 1971.

Clarity has been reissued by ESP, and Michael is still actively working today as a producer and musician. You can check out his current work at his website and his MySpace page.